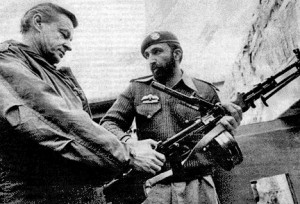 Shortly, the public will be unable to reason or think for themselves. They’ll only be able to parrot the information they’ve been given on the previous night’s news… In the technotronic society the trend would seem to be towards the aggregation of the individual support of millions of uncoordinated citizens, easily within the reach of magnetic and attractive personalities exploiting the latest communications techniques to manipulate emotions and control reason.
~ from Between Two Ages

We have a large public that is very ignorant about public affairs and very susceptible to simplistic slogans by candidates who appear out of nowhere, have no track record, but mouth appealing slogans.

The technotronic era involves the gradual appearance of a more controlled society. Such a society would be dominated by an elite, unrestrained by traditional values. Soon it will be possible to assert almost continuous surveillance over every citizen and maintain up-to-date complete files containing even the most personal information about the citizen. These files will be subject to instantaneous retrieval by the authorities…

This regionalization is in keeping with the Tri-Lateral Plan which calls for a gradual convergence of East and West, ultimately leading toward the goal ofone world government. National sovereignty is no longer a viable concept.

Another threat, less overt but no less basic, confronts liberal democracy. More directly linked to the impact of technology, it involves the gradual appearance of a more controlled and directed society. Such a society would be dominated by an elite whose claim to political power would rest on allegedly superior scientific knowhow. Unhindered by the restraints of traditional liberal values, this elite would not hesitate to achieve its political ends by using the latest modern techniques for influencing public behavior and keeping society under close surveillance and control. Under such circumstances, the scientific and technological momentum of the country would not be reversed but would actually feed on the situation it exploits.

Persisting social crisis, the emergence of a charismatic personality, and the exploitation of mass media to obtain public confidence would be the steppingstones in the piecemeal transformation of the United States into a highly controlled society.