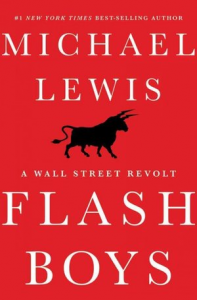 ‘You’re going to get crushed’
Is Wall Street rigged?

The explosive declaration by acclaimed business author Michael Lewis that the world’s largest sharemarket is “rigged” by high-frequency trading has sent Wall Street into a flux of chatter, self reflection and, in some cases, denial. In his famous book Moneyball, Lewis admired the quantitative skills used to recruit players to build a champion baseball team. Now he is taking aim at the ­numbers men.

“The United States stockmarket, the most iconic market in global capitalism is rigged . . . by a combination of the stock exchanges, the big Wall Street banks and the high-frequency traders,” Lewis says.

The provocative comments by the former Salomon Brothers bond salesman turned writer who has become famous exposing the rot in the finance sector will confirm the worst-held fears of regular investors: they are competing on an unlevel playing field that is tilted in favour of an elite few.

High-frequency trading firm Virtu recently revealed that it had just one losing trading day in 1238 days of trading. By using super-quick fibre pipes and computer-generated algorithms to buy and sell stocks, firms like Virtu are engaging in ostensibly riskless trading at everyone else’s expense.

Lewis’s remarks do need to be understood in context. He was promoting his new book, Flash Boys, on the prime-time Sunday evening United States television program, 60 Minutes…