The shadow forces behind the New World Order (NWO) are following a slow-paced agenda of total control over mankind and our planet’s resources. David Icke coined it the “Totalitarian Tip-Toe,” because “they” are making very small steps towards our complete and definitive enslavement.

As a result, the masses remain relatively unaware of the fact that their liberties are being gradually taken away, while the power of the NWO octopus grows steadily.

The shadow forces behind the NWO agenda

Somewhere near the very top of the pyramid, an extremely elitist organisation known as the Council of the 13 families orchestrates all of the major world events. As the name suggests, the Council consists of the top 13 most influential families on Earth.

An increasingly number of people is becoming aware that 99% of the Earth’s population is controlled by an “elite” 1%, but the Council of the 13 families consists of less than 1% of the 1% “elite” and nobody on Earth can apply for membership.

In their opinion, they are entitled to rule over the rest of us because they are the direct descendants of the ancient gods and consider themselves royal. These families are:

(Personally, I suspect that this may not be the complete list and some very powerful lineages are still unknown to us).

The Rothschild dynasty is unquestionably the most powerful – known – bloodline on Earth and their estimated wealth is around $500 trillions!

They exercise their power through the world banking empire, which is almost entirely owned by them.

The most important institutions that work hard to establish the NWO and completely enslave our species, are:

All of the above institutions function as individual states, operating under their own laws, hence there is no court of law on Earth that could ever prosecute them.

The multitude of Secret Societies in existence today, operate as branches of a mega corporation, which is owned by the Council of the 13 families.

Even though they have been handsomely rewarded for their work, the members of these secret societies are not members of the “elite” bloodlines, they don’t know who their masters are and they have no idea what the real agenda is…

Read more at These 13 Families Rule the World: The Shadow Forces Behind the NWO | Humans Are Free.

Part II: Canaan and the tribe of Dan

Read much more at The Rockefeller Bloodline.

In this compelling indepth interview with Alfred Lambremont Webre, Jay Parker, who was born into a multi-generational Satanic/ Illuminati family and received Monarch trauma-based mind-control as a child, discusses

(1) Satanic/Illuminati control of U.S. and world society and religions;

(2) His personal life experiences being brought up in a Satanic/ Illuminati family; and

BLOODLINES OF THE ILLUMINATI by Fritz Springmeier

The Top 13 Illuminati Bloodlines book can be read or downloaded here: http://www.whale.to/b/sp/blood.html/

Fritz Springmeier’s book can be read or downloaded here: http://fritz-springmeier.dbs2000ad.com/

Traitor by his own admission… 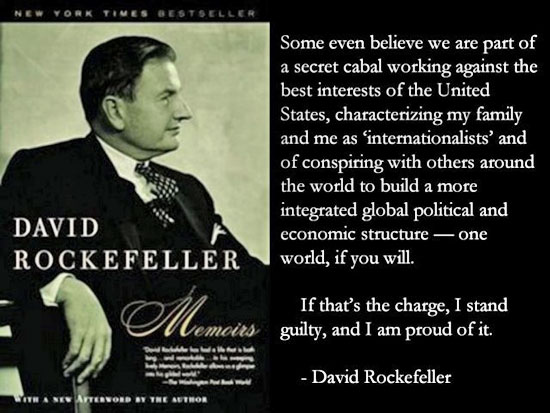 For more than a century ideological extremists at either end of the political spectrum have seized upon well-publicized incidents such as my encounter with Castro to attack the Rockefeller family for the inordinate influence they claim we wield over American political and economic institutions. Some even believe we are part of a secret cabal working against the best interests of the United States, characterizing my family and me as ‘internationalists’ and of conspiring with others around the world to build a more integrated global political and economic structure–one world, if you will. If that’s the charge, I stand guilty, and I am proud of it.
~ David Rockefeller

From former Hitler bodyguard, Otto Skorzeny’s deathbed confessions and box of photographs. Who is the boy in the center, dressed in a navy uniform?…

Since Skorzeny’s death in 1999, the various leads he provided have been followed up and tend to support what, at first blush, would appear to be the unbelievable rantings of an embittered old man. What remains constant as we pore through publicly available official records, private correspondence, memoirs, newspaper articles, photos and other “clues” is that Bush family records (the ones that exist) are a puzzle palace of inconsistencies and curiosities. Since it is a congressionally established fact that Prescott Bush was in business with the Nazis during WWII, we can safely say that the Bush/Nazi connection existed.

Who are the Bushes? How did they get connected with the Nazis? Is the connection still alive through U.S. presidents George H.W. Bush and George W. Bush? The answers are not as literal as we would like them to be. But we have the testimony of Otto Skorzeny and his photos—especially the one at right. So, here we go—the first installment of an investigation that points to a curious conclusion: The “Bush” family was created to destroy America.