Currently, only about 5% of the world’s population—350 million people—(including 200 million Americans) consume artificially fluoridated water globally. Only eight countries—Malaysia, Australia, USA, New Zealand, Singapore, and Ireland, more than 50% of the water supply artificially fluoridate. Over the past two decades many communities in Canada, the USA, Australia, and New Zealand have stopped fluoridating their water supplies and in Israel the Minister for Health announced in April 2013 the end of mandatory water fluoridation.

Fluoride has become so controversial in America that many citizen formed groups are actively, and effectively, petitioning local governments to stop the community fluoridation of municipal water. Couple this with the fact that many product manufacturers are giving consumers options for avoiding fluoride in commonly used products, such as toothpaste and mouthwash.

Read much more at http://www.zengardner.com/18-scientifically-validated-reasons-end-public-water-fluoridation/

A month before the assassination

When John Kennedy wanted to speak to the American people, he talked to Arthur Krock and Authur Krock would publish the material. In October 1963, Krock wrote:

“John Kennedy has declared war on the Central Intelligence Agency.”

“If the United States ever experiences an attempted coup to overthrow the government it will come from the CIA. The Agency represents tremendous power and total unaccountability to anyone.”

One month later, someone successfully pulled off a coup.

Excerpt from Everything Is A Lie: The Deliberate Intent To Deceive People Is At An All Time High by Marco Torres*…

Regardless of what you know, don’t discuss it — especially if you are a public figure, news anchor, etc. If it’s not reported, it didn’t happen, and you never have to deal with the issues.

Avoid discussing key issues and instead focus on side issues which can be used to show the topic as being critical of some otherwise sacrosanct group or theme. This is also known as the ‘How dare you!’ gambit.

END_OF_DOCUMENT_TOKEN_TO_BE_REPLACED

Excerpt from Everything Is A Lie: The Deliberate Intent To Deceive People Is At An All Time High by Marco Torres*…

Eight Traits of the Disinfo Artist

They never actually discuss issues head-on or provide constructive input, generally avoiding citation of references or credentials. Rather, they merely imply this, that, and the other. Virtually everything about their presentation implies their authority and expert knowledge in the matter without any further justification for credibility.

They tend to pick and choose opponents carefully, either applying the hit-and-run approach against mere commentators supportive of opponents, or focusing heavier attacks on key opponents who are known to directly address issues. Should a commentator become argumentative with any success, the focus will shift to include the commentator as well.

END_OF_DOCUMENT_TOKEN_TO_BE_REPLACED 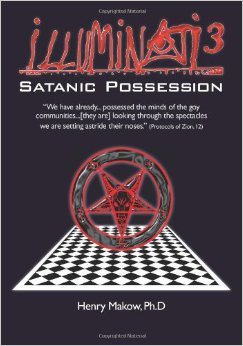 Henry Makow is the Jewish author of the game of Scruples. From the Introduction of his new brand new book, Illuminati3: Satanic Possession: There is only one Conspiracy…

What passes as spontaneous “social change” is in fact an organized process of satanic possession. This development is not an isolated or recent phenomenon. Western society is based on a rebellion against God and the natural and moral order. The so-called “Enlightenment” refers to Lucifer as the “light giver.” It was an assertion of the Illuminati’s determination to reject Reality — the Creator’s Design – and construct an artificial reality more conducive to their interests and perversions. This is what the Cabalist bankers mean by “remaking the world” or “changing the world.” There is no way to sugarcoat this. Satanist (Cabalist) Jews and Freemasons are waging a covert war against God and man and are close to achieving victory. Many Jews and Freemasons have been a subversive force throughout history – the real reason for anti Semitism. Of course, the majority of Jews (and Christians) aren’t aware of this process of satanic possession. We have all succumbed to it. Passing as “secularism” and “humanism,” Satanism is the secret religion of the West.

New book about a lover of JFK who was also executed 11 months after his assassination.

The Bill Of Rights, Suggestions and Privileges
Posted on April 24, 2014 by horse237

Few people noticed that government changed the First Amendment to really mean that you can assemble in a designated Free Speech Zone and sign a petition which you cannot present to an elected official without committing a felony. The Federal government has been revising the Bill of Rights to such an extent that the original might seem unrecognizable to older generations. Rather than wait for the Revised Bill of Rights to appear in 2020 I have written the document now from current trends.

The First Amendment used to be:

Congress shall make no law respecting an establishment of religion, or prohibiting the free exercise thereof; or abridging the freedom of speech, or of the press; or the right of the people peaceably to assemble, and to petition the government for a redress of grievances.

It now is: Religion is permitted to those who have successfully applied for and received a government license based upon the loyalty of its congregations and leaders to adhere to directives from the Department of Homeland Security.

Freedom of Speech is guaranteed to those corporations with 20 million dollars to donate to political campaigns. The Congress has the right to ignore taxpayers and listen to the opinions of tax free billionaires. This is according to two college professors who followed almost 2,000 public policy decisions. The opinions of taxpayers count for nothing against the demands of those with the cash to donate as the charts below indicate…

Read much more at https://vidrebel.wordpress.com/2014/04/24/the-bill-of-rights-suggestions-and-privileges/

To spray toxic chemicals in the air as if it is the right of a few to destroy the Earth and its people, is criminal; it’s murderous. This beautiful planet and its beautiful, innocent inhabitants have as much a right to live long, healthy, happy lives as do those who are bored with their wealth and power. We need some whistleblowers in this area.

Linderman Unleashed Radio Show March 28th 2013 Broadcast. Curt Linderman speaks with Dr. Blaylock about the devastating health effects of the chemtrails and geoengineering programs which have been implemented in secret without public consent.

The Internet is littered with stories of “chemtrails” and geoengineering to combat “global warming” and until recently I took these stories with a grain of salt. END_OF_DOCUMENT_TOKEN_TO_BE_REPLACED

What in the World are They Spraying? – 95 minutes

By now everyone has seen crisscrossing streaks of white clouds trailing behind jet aircraft, stretching from horizon to horizon, eventually turning the sky into a murky haze. Our innate intelligence tells us these are not mere vapor trails from jet engines, but no one yet has probed the questions: who is doing this and why. With the release of this video, all of that has changed. END_OF_DOCUMENT_TOKEN_TO_BE_REPLACED