53 years ago the Mafia and America’s corrupt government murdered President Kennedy. In this explosive new book I prove these dark forces did in fact assassinate President Kennedy on 11/22/1963. This 351 page book has over 100 photographs and countless links insuring you will be convinced Harvey Oswald was what he claimed and that was he was in fact just a patsy. This fascinating new book hopefully will force our fascist government to, release all the countless documents their hiding under NATIONAL SECURITY before the 2039 deadline they now cling to…WAKE UP!

2. The creation of the biggest oil monopoly in the world.
John D. Rockefeller then decided to seek his fortune elsewhere and moved to Cleveland Ohio, where the oil business began to boom. There he established an oil refinery and gained prosperity through cunning plots, ruthlessness, conspiracy, shady deals and other criminal deeds. John D’s. “Standard Oil” company would grow and expand to become the biggest oil monopoly in the world. The Standard Oil monopoly got so big and powerful, that in 1911, the U.S. Supreme Court decided that the oil company violated the US Antitrust Law and that it had to be split up. This created various new successful Rockefeller oil companies, such as Exxon-Mobil (Esso), Chevron Corporation, Texaco and Gulf Oil. Having a positive effect on the stock market, the 1911 Supreme Court decision in effect made the Rockefeller family even more rich and powerful.

The Rockefellers have always had intimate business and family relations with other powerful family dynasties, such as the Morgan banking family, members of the steel magnates of the Carnegie family, the DuPont family and the Rothschild banking families from Europe. The Rockefellers were connected to the Union Pacific Railroad company of E.H. Harriman. They were involved in the sponsorship of the Kuhn & Loeb bank in the United Kingdom and they had numerous business deals with Hitler’s Nazi regime in Germany. There were the instrumental force behind the German chemical company I.G. Farben, which built and controlled the concentration camp Auschwitz, situated around the I.G. Farben chemical factory. Rockefeller’s Standard Oil patented fuel even powered the entire Nazi air force ‘the Luftwaffe’.

3. David Rockefeller in the 20th and 21st century.
During the 20th century David Rockefeller and other descendants of John D. Rockefeller maintained their wealth through banking, oil and expanded their power through politics and think-tanks or other non government organisations (NGOs). David Rockefeller, the oldest member of the Rockefeller family, is one of the founding members of the secretive Bilderberg Group, the Trilateral Commission and the Council on Foreign Relations.

4. The full dominance of the Rockefeller empire
The power of the Rockefeller family is not limited to the oil industry, they control large portions of the banking industry, the central banking system in the US through the Federal Reserve and overseas the European Central Bank. Through Rockefeller-controlled companies, organisations, think-tanks and other NGO’s the family created The United Nations, Bilderberg Group, Trilateral Commission, Council on Foreign Relations, Planned Parenthood, the Population Council, the Council of the Americas and the Rockefeller Foundation. Among other Rockefeller companies are: Monsanto, United Airlines, American Airlines, American Railroads, AT&T, Honeywell, Quaker Oats, and AXA Equitable Life Insurance. The estimated combined Rockefeller fortune is so big that it can be expressed in percentages of the entire US economy. The ultimate plan of these international oligarchs is to enslave humanity under a tyrannical one world government, ruled and controlled by them. 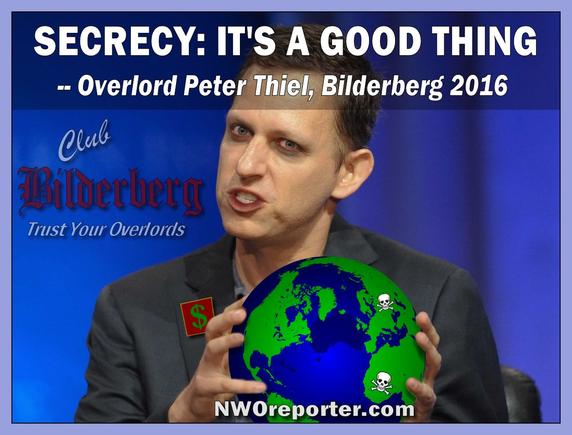 Ever since the Bilderberg Group was discovered in the 1970s, its members have been the target of constant bullying. Is this the kind of example we want to set for our children? (satire)

Read the entire article here: The Bilderberg Group – Love is the Answer